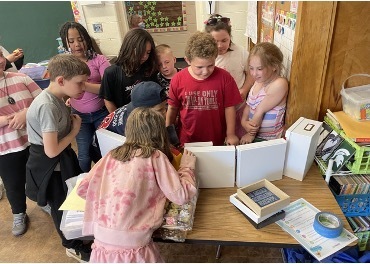 Randall students get creative with their learning

This year, third graders at Randall Elementary School completed a project that will be sure to be one they remember forever – creating their own educational board games focused on math, and then playing them with their parents and peers.

“The last year has been a challenge for these kids,” says Donna Cahalan, third grade teacher at Randall. “We wanted to give them a different type of project to get them back into a groove. We know they needed to get those social interactions that they haven’t had a chance to get due to COVID.”

The project started out in the beginning of the school year when students were introduced to several different board games, including classics like Candyland, Monopoly and Operation. They were then given the chance to play them in school.

“When we started the project, we knew we wanted to have parents come in and play these games at the end of the year,” said Donna. “We wanted them to have a project-based learning opportunity that then they could show off to the people they love.”

As the project went on, students were given the opportunity to play an online logic game called CoraQuest where they were able to work on their team building and writing skills.

“We wanted to look at topics they were struggling with and incorporate those into the project, which is why we landed on creating a math game. We went step-by-step through the writing process for instructions, then played Coraquest and finally broke them into cooperative learning groups to get those social interactions that they haven’t really had over the last couple of years,” said Donna.

That’s when the real fun started.

“Students were  shown how to design a board game,” said Donna. “They were given lessons on creativity and templates to get some ideas. After that, they were asked to start thinking of their own games and what they could be.”

Jessica Hatfield, the instructional coach that co-led the project, also sees the importance of the timing of this project.

“We know these students needed a space to socialize and interact with one another,” she said. “Students who were excelling at math and reading were able to gain more social skills, and kids who were struggling in both areas were able to gain some exposure in both of those areas.”

Despite all of the great moments during the project, the highlight was at the end when parents were invited to play the game with the “game masters,” the title of the students who created the games.

“We had nearly all of the parents attend and participate in the games,” said Jessica. “The kids were very excited about it.”